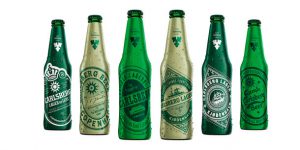 Carlsberg is celebrating its unique history with the re-launch of six of its vintage labels, each telling a story of how the Danish beer company has been a first-mover in everything from long beards to international shipping.

From the creators of the pH scale and the first pure brewer’s yeast, the company that donates 30 percent of its dividends to support science, art and culture through the Carlsberg Foundation, is launching a Vintage Label beer collection to further celebrate Carlsberg’s rich history.

Six of the iconic vintage labels will be available in a limited edition series, each telling the tales of the many innovations over the years. “Each iconic label tells its own story,” says Kris Hansen the International Beer and Cider Category Manager at Boundary Road Brewery, “Such as when Carlsberg placed a ship on its labels to avoid bootleggers – way before piracy was even a phenomenon. Or, when individual brewer’s names were put on the labels in a true spirit of co-creation.”

These are probably the best-looking beer labels you have ever seen. The six Vintage Label bottles are also coming to life in a series of irreverent 15-second films, beginning with the infamous social media meme “Meanwhile in…. While the tone is classic Carlsberg humour, one should not be fooled, this is a company that is always striving to do better. Crafting better beer.

The history of Carlsberg can be traced back to 1800 when a farmer’s son named Chresten Jacobsen moved to Copenhagen and founded a brewery.

His son JC Jacobsen had a passion for beer, but also science, and moved the brewery outside Copenhagen to secure the best possible water quality for the beer. He was quick to adopt new techniques and technologies into the brewing process and used it to purify yeast and cure “beer sickness“of the time. This was the springboard for the world’s first modern lager and a beer that was not only to become big in Denmark but all over the world.  Jacobsen’s fascination with science and technology set the stage for one of the world’s biggest brewing companies to become a hub of innovation for bot beer and other scientific breakthroughs such as the pH Scale.