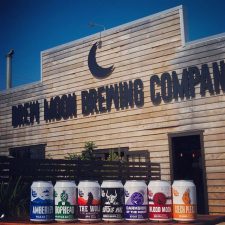 The Brew Moon Brewing Company celebrates its fifteenth birthday this month, with a new set of 330ml cans and refreshed labels.

Newcomers The Wolf of Washington APA and Sitting Bull American IPA will join long-term favourites Hophead IPA, Darkside of the Moon Stout, Amberley Pale Ale, Blood Moon Red IPA and the Pilsner. The seven cans will be available from the brew pub in Amberley and throughout New Zealand supermarkets and retailers.

Originally established in 2002, Brew Moon has seen value in remaining a small, family-owned business. Founded by husband and wife Kieran McCauley and Belinda Gould, they now have their sons, Toby and Oscar, working alongside them.

Jules van Costello, author of BREWED; A Guide to the Craft Beer of New Zealand says: “At fifteen years old, Brew Moon is one of the longest-lived brewpubs in New Zealand and were pioneers of fiercely independent local beer long before beer lovers were even talking about such things. Their beers Hophead and Dark Side are amongst the country’s finest.”

Kieran and Belinda were originally inspired by the American craft brewing scene, when the family lived in California in the late 1990s. When they returned to New Zealand, Belinda continued her day job as a winemaker while Kieran and original brewer Carl Hadler set up the brewery in the old Cider Garden facility just outside Amberley. The doors opened in October 2002.