The international demand for fine Australian wine continued to grow in 2018, with both value and volume increasing over the course of the year.

In the 12 months to 31 December 2018, the value of wine exports increased by 10 per cent to $2.82bn free on board (FOB), while volumes increased by five per cent to 850 million litres (94 million nine-litre case equivalents

“This demand translated into growth in almost all price segments.” 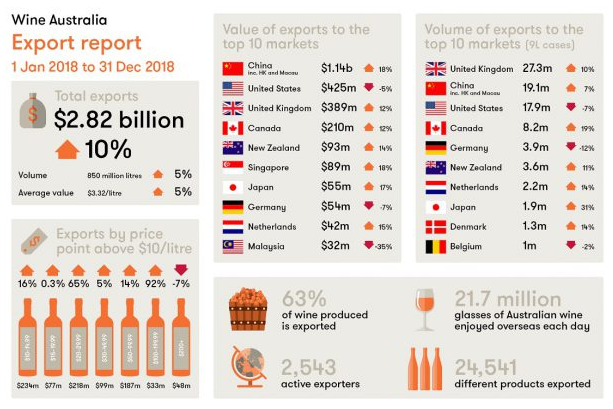 Red wine continues to be the most popular wine style exported from Australia, and value increased by 12 per cent to $2.14bn in the year ended December 2018. The value of white wine exports also grew – by 10 per cent to $607m.

There was growth in Australian exports to nearly every region of the world in 2018, with exports to North America starting to level out after being in decline for more than 12 months.

The value of exports to:

The FMCG Business Marketing Summit is returning to Auckland on 29th September 2020, at the Ellerslie Events Centre. The 2020 summit promises to be a full day, jam-packed with education, stimulation and curated sessions that will[...]
View Calendar
Add