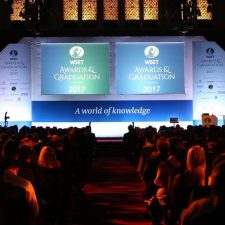 Two New Zealanders have become two of only 460 people in the world this year to be awarded the coveted WSET Diploma from the Wine & Spirits Education Trust (WSET).

Jennifer Rothenberg and Connal Finlay, along with more than 500 of the most influential wine and spirits professionals in the world, celebrated the annual Wine & Spirit Education Trust (WSET) Awards and Graduation at the historic Guildhall, City of London.

Hosted by WSET Honorary President Gérard Basset OBE, MS, MW and WSET Chief Executive Ian Harris, the leading global provider of wines and spirits qualifications presented 49 awards and prizes in recognition of the outstanding achievements of the candidates for the past academic year 2015/16.

Rothenberg, a wine educator for Pernod Ricard; and Finlay, a student and entrepreneur; were honoured as two of the year’s 460 WSET Level 4 Diploma graduates, marking their achievement as two of just over 9,000 people in the world to have ever held WSET’s highest qualification. The course develops an in-depth knowledge of wines and spirits – from production, regions and styles, and the global trade in wines and spirits. The Diploma is also universally viewed as the stepping stone to the Master of Wine qualification. “The Kiwi wine industry is an incredibly dynamic and exciting place to be, to learn about wine from such a rapidly growing and young wine country was a gift,” says Rothenberg. “The success of what this group of people have achieved in just a few decades is extraordinary, and will always be an inspiration to me!”

Other graduates and award winners hailed from the UK, Canada, USA, China and Japan.