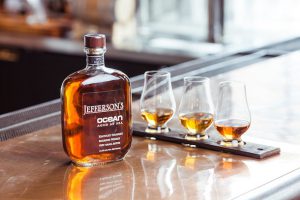 There is a limited edition bourbon which has been aged for nearly a decade on land before being matured aboard a ship – Jefferson’s Ocean Aged At Sea Bourbon.

The principal author of the Declaration of Independence and one of the greatest Founding Fathers, Thomas Jefferson was elected the third President of the United States in 1800. During his tenure, Jefferson authorized the purchase of the Louisiana Territory, dispatched Lewis and Clark westward in order to explore the remainder of the continent and repealed the Whisky Excise Tax.

After Jefferson retired from public office in 1815, he often tended to the garden that he had cultivated on his Monticello estate. At the time, it was customary for wealthy farmers, including Jefferson, to distill the excess grains they harvested from their farms into spirits (George Washington was one of the country’s largest distillers of rye whiskey).

As a result, each farmer’s spirits were unique and reflected the local terrior of their farm. Jefferson’s Ocean Aged At Sea Kentucky Straight Bourbon Whiskey pays homage to Jefferson and the exquisite whiskey he distilled.

Jefferson’s Ocean Aged At Sea Bourbon is matured in American oak casks for approximately seven to eight years on land, before the casks are placed on a ship and allowed to rest for another five to ten months at sea. At sea, the bourbon and oak casks are forced to mingle with each other as the ship rolls back and forth over the water.

In addition, the temperature and barometric pressure fluctuations during the sea voyage cause the oak staves to expand and contract, and allow the bourbon to extract more of the tannins and flavour from the oak during its maturation. “This limited release whiskey aged beautifully,” says Trey Zoeller, Jefferson’s founder and master blender.

As a result of this unique maturation process, Jefferson’s Ocean Bourbon has an aroma of vanilla, caramel and burnt matches. Thick notes of butterscotch, vanilla, brown sugar, and salted caramel dominate the palate, and lead to a finish accented by sweet hints of citrus.