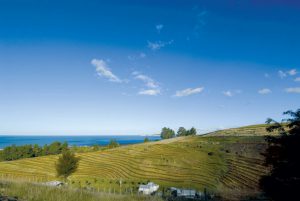 The Hawkes Bay A&P Wine Awards are the oldest regional wine competition in the country and celebrate Hawkes Bay as a premium wine growing region. Esk Valley Estate scooped the top prize – Champion Wine of Show – for the second time this year with its Winemakers Reserve Chardonnay 2014.

The Hawkes Bay A&P Wine Award judges bestowed Esk Valley Estate with the top Chardonnay Trophy out of the 47 other Chardonnay contenders and Best of Show overall just months after the same awards were received for the wine at the Spiegelau International Wine Show.

In addition, the Esk Valley Hawkes Bay Pinot Gris won the Pinot Gris trophy out of the fifteen other wines in that category.

Winemaker Gordon Russell reflected on what he believes makes the ‘Wine of Show’ so good, and that is the unique site where the grapes are grown: “From adversity has come a thing of beauty; we’re talking about a vineyard in Bay View that was under water just 80 years ago. When the 1931 earthquake struck it changed the landscape of the area and now home to this special Chardonnay,” he said.

Esk Valley Estate is a regular winner in the top billing at this show, having picked up the Champion title again in 2012, winning the overall prize with a Syrah and in 2011 winning Winery of the Year.

Villa Maria victorious in the vintage of the century

After over 35 years of being New Zealand’s most awarded winery, Villa Maria has managed to hold fast to its award-winning dominance and achieved an almost clean sweep of the red wine categories at the Hawkes Bay A&P Wine Awards.

Villa Maria Estate dominated at the show winning eight trophies all up, including the Reserve Champion Wine of the Show. Villa Maria’s Group Chief Winemaker Nick Picone said the results reflect Villa Maria’s focus on quality: “The 2013 vintage is widely acknowledged as Hawkes Bay’s finest red wine vintage ever, so for Villa Maria to have won almost all the top red awards is an amazing acknowledgement that our wines are the best of the best from 2013. Our team puts a lot of effort into our premium Hawkes Bay vineyards and as owners of a significant portion of the prestigious Gimblett Gravels area, we’re fortunate to be able to create some very special wines from what these vineyards proffer,” he said.

Chairman of Judges Rod McDonald said the winning wines stood out for their “plushness, balance and approachability,” which are all key attributes Villa Maria sets out to achieve in their winemaking philosophy.

– Reserve Champion Wine of the Show